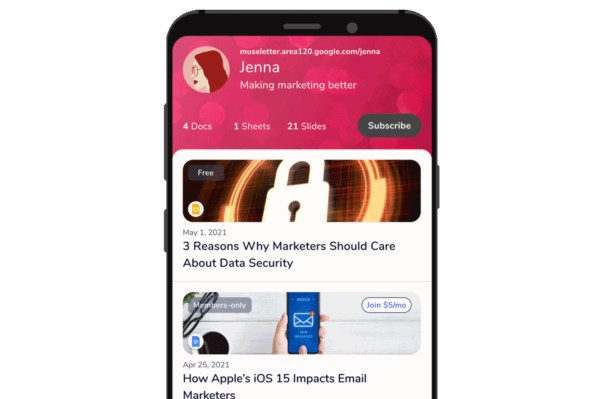 Following the market entry of newsletters from technology companies such as Facebook and Twitter, Google is also experimenting with newsletters. The company’s internal R&D division, Area 120, has a new project called Muzzle, which allows anyone to post a Google Drive file as a blog or newsletter to their Museletter public profile or to a mailing list.

Essentially, the effort would be to reuse Google’s existing document creation tools as a way to compete with other newsletter platforms, like Substack, Ghost, Revue and others, which are now attracting a growth public.

Google’s experiment was spotted this week by sites including 9to5Google and Android Police.

Contacted for comment, a spokesperson for Area 120 declined to share more details about Museletter, saying only that it was “one of many experiments” within the R&D group and that “it” is still very early “.

On the Museletter website, however, there is already a lot to learn about the project. The site explains how Google Drive could be monetized by creators in order to allow Google’s newsletter project to differentiate itself from the competition. Not only could newsletters be written in a Google document, but other productivity apps could also be used to share information with readers. For example, a newsletter creator might offer a paid subscription plan that would allow readers to access their Google slides. A creator who writes about finance might post helpful spreadsheets on Google Sheets, which would be available to their followers.

To make this possible, Museletter editors would create a public profile on their Google Drive and then post any Google Drive file directly to it. This provides them with a landing page where they can market their subscriptions and showcase the number of different Drive files they have made public in Docs, Sheets, and Slides.

Creators can also optionally post to a mailing list, including a list imported from other platforms. Newsletter subscriptions can be free or paid, depending on the creator’s preference, but the use of Museletter itself will be free. Instead, the project aims to monetize with premium features like custom domains, welcome emails, and more.

Although the site does not mention any advertising plans, a success in this space could provide Google with a new advertising revenue stream – and which comes at a time when the tech giant’s multibillion-dollar advertising market has a new challenger in the form of Amazon, whose own advertising firm could finally challenge the Facebook-Google duopoly.

Google did not say when it plans to launch Museletter, but the website offers a link to a form where users can request early access.