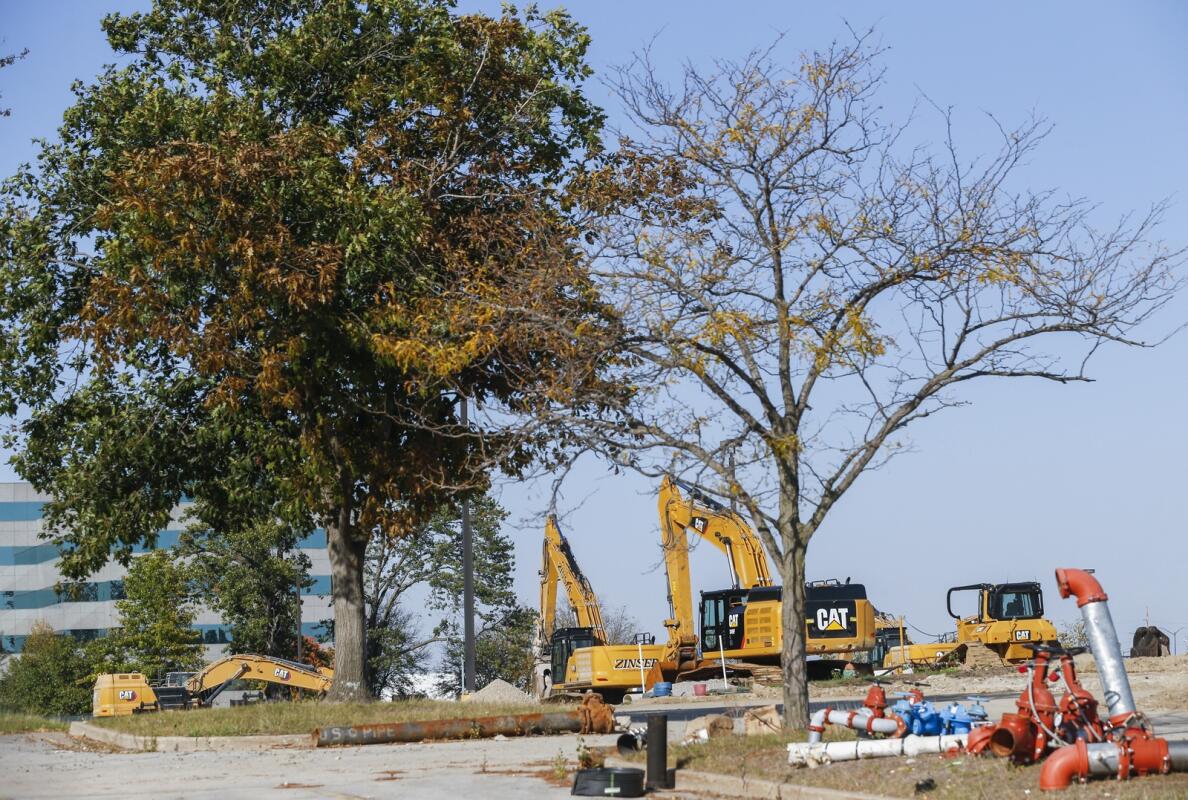 Debris is cleared October 19 from the former Transamerica location at Edgewood Road NE and 42nd Sttreet NE at Cedar Rapids. Hunter Companies was looking to develop the 51-acre site, but withdrew plans to do so (Jim Slosiarek / The Gazette)

Dave Watson of Cedar Rapids addresses people who showed up at a Cedar Rapids Town Planning Commission meeting on October 28 to voice concerns about a planned development at the former Transamerica site in the northeast by Cedar Rapids. (Geoff Stellfox / The Gazette)

CEDAR RAPIDS – A lawyer for Hunter Companies confirmed on Thursday that the local company no longer plans to buy the old Transamerica site and develop a mixed-use facility there, which casts uncertainty over the future of the 51 acre property at Edgewood Road and 42nd Street NE.

A preliminary subdivision plan was due to be presented to the Cedar Rapids Planning Commission on Thursday after its initial review was filed in October so Hunter Companies can work with residents to address concerns about the development.

The planned mixed-use facility had pissed off hundreds of residents who rallied against the proposal over concerns about traffic, stormwater management and tree removal.

But Shannon Thompson, general counsel for Hunter Companies, said in an email Thursday that “Hunter Companies is not going ahead with the purchase of the site.” The preliminary dish was taken off the agenda of Thursday’s planning committee.

Thompson did not respond to questions regarding why the company is withdrawing its plans or what allowed Hunter Companies to withdraw from the purchase. She had said earlier that the company had contracted with Transamerica to purchase the site.

Thompson also said no tenants have yet been lined up for the rapidly developing area around the intersection with Highway 100.

Thompson had pointed out Hunter Companies’ experience with similar developments, such as the Northtowne Market site across from Target on Blairs Ferry Road NE, which includes restaurants such as Moe’s Southwest Grill and Jimmy John’s as well as a lounge and an elevated spa.

Other Hunter Companies developments in the area include the Berthel Fisher Financial Center in a suite located at 4201 42nd St. NE – near the Transamerica site with WineStyles, Parks & Schmit, Berthel Fisher and other users, as well as Edgewood Station and Edgewood Market on Edgewood Road SW near Westdale.

Coldwell Banker Hedges Realty was negotiating the sale of this property. The real estate company did not respond to a request for comment.

Resident Dave Watson, who has organized a Facebook group to oppose the proposal and shared hundreds of flyers informing people of the site plans, said residents are hoping someone comes forward to develop the property, hopefully a local developer.

Watson said he and other residents are hoping to see residential property on the site blend in well with the existing neighborhood without disrupting traffic at the busy intersection.

The site is now zoned Regional Suburban Mixed Use Center, which allows for a variety of uses including multi-family, commercial and office uses.

“We hope the next developer will want to work with the residents and the community and blend the project with the remaining neighborhoods,” Watson said. “… It’s unfortunate that it can’t be Hunter.”

“The world is different”

Board member Scott Olson, a real estate broker with Skogman Realty, said the proposal had derailed in part because of opposition from the neighborhood resulting from the controversial first meeting in October, which drew around 100 residents.

In addition, said Olson, some users have pulled out and the combination of events led to a “Catch-22” situation that turned the tide against further development of the site. (Olson was not the listing agent or seller of the site.)

The proposed development plan showed only flat lines without any rendering.

Olson said residents couldn’t clearly tell from this drawing what the developer’s plan for the site was, which led to organized opposition.

For example, he said, a mixed-use facility was unlikely to have resulted in more traffic than there was when all the Transamerica workers were filling the office building before the pandemic. , but residents never had the opportunity to see the potential impacts on traffic.

“The world is different today than it was then,” said Olson, and developers have to build what people will pay for, and these days there is a demand for housing and some projects. commercial, and fewer offices.

Any developer requesting incentives from the city will have rules to follow regarding things like planting trees to replace those that might be removed during development, Olson said.

“The problem is that this site will be developed,” Olson said. “Who can it be, who knows?” It could be someone better, someone worse. Whoever buys this site just has to go with a different direction. Something’s going to happen there.