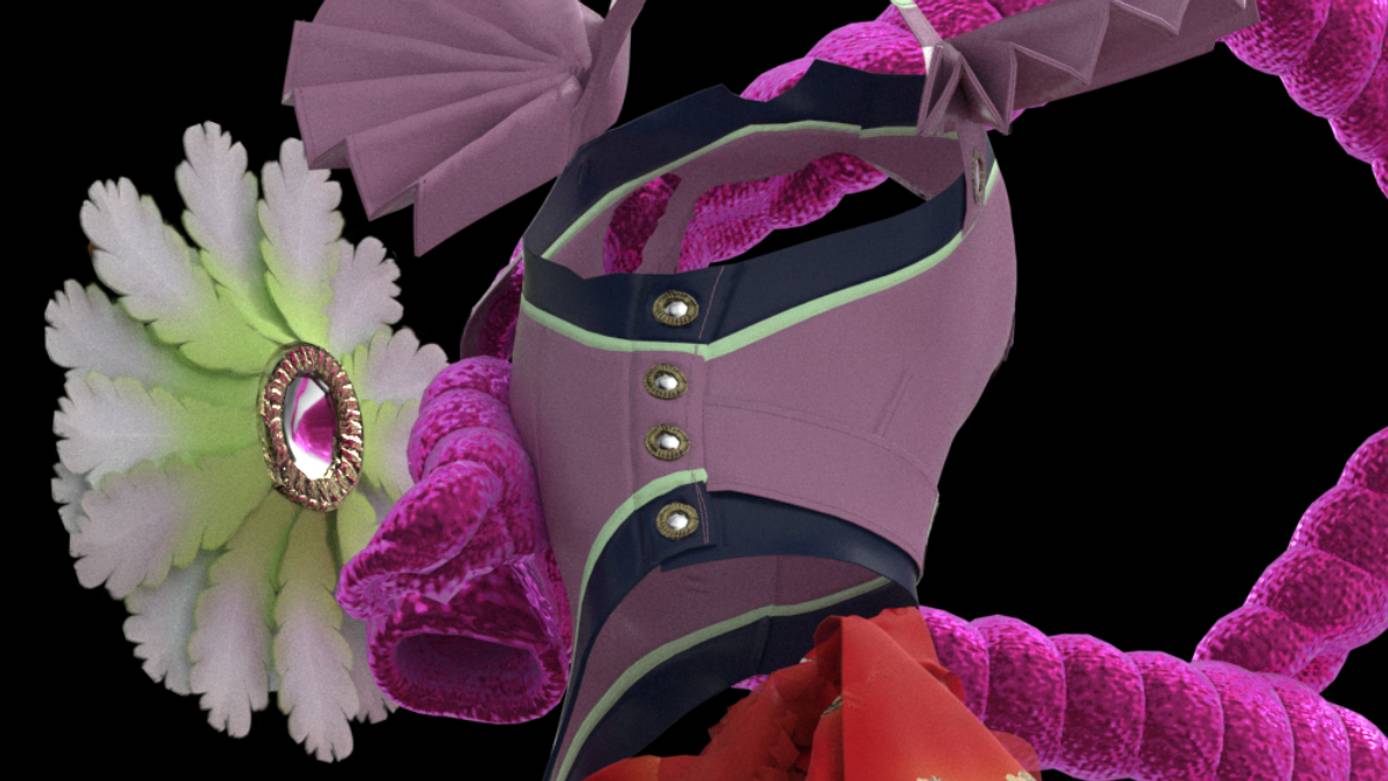 “The metaverse offers designers creative freedom and a revenue model”

For experimental fashion designers, the contemporary fashion industry is no easy place. Anyone who wants to make money has to design for the general public – and it is precisely this general public that is most interested in clothing that conforms to existing conventions. These conventions exist in the form of trends and dress codes, but they are often also simply practical: after all, it is easier to shop on a bike in jeans than in an extravagant creation with flowing layers or protrusions.

Over the years, however, a new space has opened up where anything seems possible: cyberspace. Here, the same social rules or practical considerations do not apply only in real life. This makes the virtual world the place for experimental design, according to designer Shayli Harrison. Harrison graduated from the Royal Academy of Fine Arts in Antwerp in 2018. She recently started the company Mutani (pronounced Mútani), which helps designers translate their work into the digital realm. “Cyberspace is where our work can have real value,” she says.

Between creativity and commerce

Deconstructed clothes, gigantic sleeves of colorful shiny fabrics, fabulous lip jewelry and hypnotic prints, Harrison’s graduation collection “Crimes Against Nature” was a collection that was completely beyond imagination. In the past, the Academy of Antwerp has often produced radical designers who work at the forefront of fashion and art. “We don’t come out of the academy as designers, but as creative directors, people with artistic vision,” Harrison said. “At the academy, you mainly look at illustrations, books, art. You sculpt and draw, then turn those ideas into clothes.

For this type of designer, it is often difficult to find a place in the commercial fashion industry. Harrison explained, “The more creative you are, the more likely you are to find yourself in some sort of vacuum between art and fashion. You are an inspiration to many other designers and brands, but you yourself are not being hired anywhere. Over the years during and after his training, Harrison discovered other downsides to the industry. “Mass production, waste, bad working conditions… I decided: this is not the place for me.

From digital village to metaverse

It’s no coincidence that Harrison found herself in the world of digital fashion. During her studies, she had already developed a virtual reality experience which she presented at the academy. After graduating, Z33 art center in Hasselt, Belgium asked her to work on a VR art project with a small team of digital artists. “We made an interior of textiles through which virtual creatures walked. You could see them with VR glasses hanging from the ceiling. It gave me an idea of ​​where I wanted to go.

Around the same time, a call for applications was launched for Digital Village, a project of Evelyn Mora, also the mastermind behind Virtual Helsinki Fashion Week. This ‘digital village’ is in fact a vast ‘multiplayer metaverse’, a virtual meta-universe with possibilities for navigation, play and social interaction. Digital Village also provides a stage for digital designers, who can sell their creations through a marketplace. Harrison applied with his portfolio to the Digital Village Open Call and was successful. Since last November, she has been working with a team of twelve experts in the field of animation, sculpture and sound on the two-minute film “Fear the Foli-age”, which will be released soon as part of the launch of the Village. digital. The film’s imaginative characters and their extreme outfits, designed by Harrison, are based on extinct flower species such as the lapwing flower and blue holly.

During the course of the project, Harrison was told that she could sell her digital designs and avatars on the Digital Village online marketplace in the form of NFT, short for non-fungible tokens. “I really had to find out what that meant. I had heard of it, but what the hell could I do with it?

The term NFT will still seem confusing to many readers. In a nutshell, non-fungible tokens are virtual, non-exchangeable proof of ownership for digital items. These could be, for example, avatars or digital outfits that you can use in games, but also virtual works of art or music tracks. NFTs are anchored in a blockchain system, which records who owns it and where sales transactions are recorded. NFTs can be bought with cryptocurrencies, like bitcoins, but also with dollars or euros. Although the NFT trade is not yet so widespread, some are already investing heavily in it. The first NFT dress, designed by the Dutch company The Manufacturer, was sold in 2019 for the equivalent of 8,120 euros.

A craving for wonderful things

The NFT market is now growing. NFT resellers and designers like Harrison are not only reacting to the increasing use of the Internet by consumers, but also anticipating developments to it. “The deeper I dug, the clearer it became to me that there was a lot going on around ‘Web3’,” Harrison said. “It’s basically a future prospect for the Internet in the form of a metaverse, a virtual world created by game developers rather than coders, and where everything is visual. In Web3, an important role is reserved for personal avatars with which you can move around the metaverse. This avatar can be styled, just like in games such as The Sims, Animal Crossing, and Fortnite.

Several major fashion brands are already establishing themselves in cyberspace, especially in the world of gaming. These brands mainly offer digital versions of existing looks. Harrison thinks it’s boring: “I don’t want to run in a game with a crop top and leggings on. The design must serve the purpose of the game world, which is to explore our imaginations.

Harrison sees the game world and the metaverse as a “safe space” where people can freely experiment with shapes and identities and have fun with fashion, far from the conventions of everyday life. “I sometimes have the impression that fashion has lost this pleasure a bit. There is a desire for theatricality, for weird and wonderful things. Fashion has become so rigid. The gaming world is the opposite of that. This is where my work can really help.

The “Cyber ​​Six of Antwerp”

Harrison further wants to provide a way for other designers to get the most out of their creativity and also to benefit from the income model that digital design offers. “Designers who develop their work digitally can sell it online. It could also give them the financial space to continue designing in the real world. Digitization, however, requires specific knowledge and skills and is far from obvious to most designers, ”observed Harrison. “There are a lot of designers whose work is very appropriate for the metaverse, but who don’t understand the technology behind it.”

Enter Mutani. The company is bringing together radical designers and tech experts to create a digital fashion “that encourages gamers to explore raw forms of self-expression in games and the metaverse.” The designs developed are sold through blockchain platforms, with the profits being shared equally among the contributors. The idea is that the financial and creative freedom afforded by digital fashion will ultimately lead to more room for fashion experimentation in the physical world.

Three avatars of “Fear the Foli-age” have already been released under the Mutani name, as has a series of spectacular jewelry digital versions from Harrison’s graduation collection. Harrison is currently working on a test case for Mutani’s work process, under the name ‘Antwerp Cyber ​​Six’, a playful derivative of the Antwerp Six. The plan is to invite six former students of the Academy of Antwerp to walk through the stages of digitization with Mutani. To do this, Harrison digs through the academy’s archives for graduation collections with potential for metaverse. “We’re trying to find out which work best fits the fantasy of the game. It has nothing to do with fashion or trends, it’s about being able to build a story around a character. She laughed, “It basically comes down to looking for the strangest shit.”

Going forward, Mutani is set to become the starting point for the most wacky fashion on the cyber scene, the place for the most wacky digital creations. In fact, that future is speculative, observed Harrison. “There are a lot of startups that are firmly committed to Web3, but what exactly it will look like and how it will work exactly, no one knows for sure yet. It takes time to find out. This time had to be well spent.

This article originally appeared on FashionUnited.NL. Translation and editing by: Rachel Douglass.