A tornado touched down in Orange County and damaged a distribution center near downtown Mebane as part of a severe weather system Friday afternoon.

The National Weather Service issued a tornado warning for the communities of Mebane, Hillsborough and Rougemont around 5:20 p.m. Friday, with the tornado reportedly touching down shortly after. High wind speeds apparently tore away parts of the walls at the Gildan Goldtoe distribution center at 7100 East Washington Street.

Images of wind damage to the Gildan Distribution Center in Mebane following a tornado that touched down on May 6, 2022. (Photo via Orange County Sheriff’s Office.) 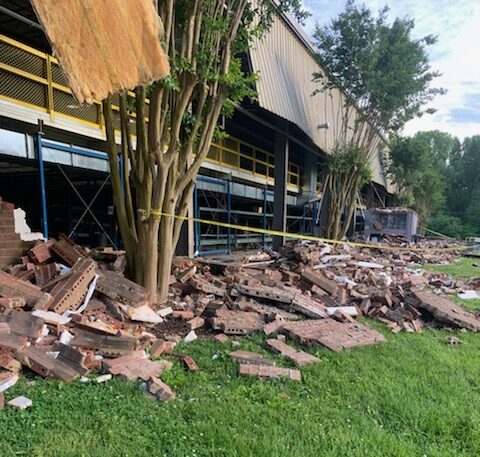 Orange County Emergency Services quickly confirmed the tornado’s landfall and damage along East Washington Street. Officials later told CBS 17 that 30 people were inside the Gildan Building at the time of the storm, but no one was reported injured by the wind.

Orange County Emergency Services confirmed a tornado in Mebane with damage to multiple structures in the E. Washington Street area. Please be aware of downed power lines due to high winds associated with the storm. Suppose all the power lines are live and not approaching.

The future of the distribution center, which is close to Orange County’s border with Alamance County, looks relatively limited. The Alamance News reported in March that the parent company plans to close the site this summer as part of an effort to reduce staff and improve efficiency. The center is scheduled to close on Thursday, June 30.

While much of central North Carolina remained under tornado watch through 10 p.m. Friday night, the National Weather Service reported no further tornadoes in Orange County and the surrounding community. Local school systems, however, canceled after-school activities ahead of the inclement weather.

Chapelboro.com does not charge subscription fees, and you can directly support our local journalism efforts here. Want more of what you see on Chapelboro? Let us bring you free local news and community information by signing up to our bi-weekly newsletter.