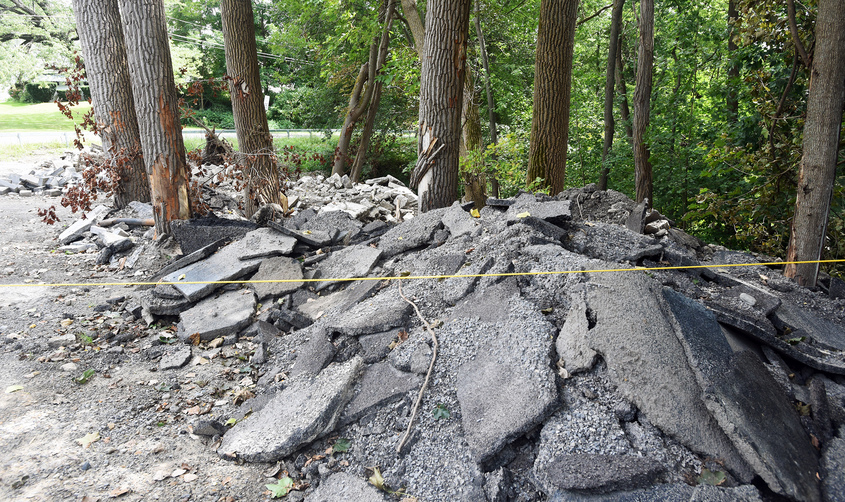 TRIBES HILL – Residents say the tranquility and peaceful nature of the area has drawn them to their neighborhood. This was disrupted by the dumping of construction debris and general fillers into a ravine at the corner of Mohawk Drive and Main Street.

“We haven’t had any problems so far,” said Gene Dacre, who lives behind the site.

“It was so quiet here,” agreed Freya Dacre.

The husband and wife and their neighbors said they were not notified when construction vehicles arrived last summer and began dumping materials into the ravine around the corner that fell steeply from the side of the road.

“Everyone in our neighborhood has been disturbed,” said Tara Sheehan, who lives across the street from the property.

Concrete bridge beams, frames, blocks and slabs noisily dumped over the edge rocked surrounding homes in the residential area. The arrival of dirt and stone debris caused clouds of dust to rise, forcing neighbors to close their windows.

The activity came to a halt last summer as abruptly as it did not start to resume again this year with the return of sunny days. The embankment created a small lot around the corner.

Affected residents approached Mohawk City Council in August to seek answers only to learn that the activity is permitted without requiring local approvals or permits.

“I don’t understand why this is when we all need to get permits to do anything with our homes,” Sheehan said. “Aren’t there zoning laws that forbid going in with huge tractors and trucks and throwing these things in here? “

City supervisor Ed Bishop said the situation is governed and authorized by State Department of Environmental Conservation regulations. There are no local laws covering ongoing activities, not even a noise ordinance.

State environmental law permits the disposal of up to 5,000 cubic meters of recognizable and uncontaminated concrete, asphalt pavement, brick, glass, rock and general fill from construction activities and demolition.

The rules state that such activities are exempt from normal waste management regulations as long as no fees or other forms of payment are obtained for the acceptance of materials which must be received during daylight hours and must not contain any residue from construction and demolition handling and salvage facilities. Waste should not be deposited in surface water or groundwater.

Following complaints from residents, code enforcement officer Stan Waddle and a DEC inspector visited the landfill site at the corner of Mohawk Drive and Main Street in August. It was determined during the visit that approximately 3,800 cubic yards of general fill composed of concrete and asphalt had been laid out on site in accordance with the law.

Waddle also confirmed that much of the material came from the Route 5 bridge reconstruction project at Fort Johnson with the on-site project manager of Tioga Construction.

Tioga was reportedly already informed by DEC that the activity was authorized after receiving permission from owner Thomas Georgia to dispose of construction debris at the site.

The only problem the inspection found was the presence of a “small” amount of grass clippings and wood debris mixed with the materials. Georgia has been ordered to withdraw those documents and has complied, according to Waddle.

“You can have a hard fill or a soft fill, you can’t have the mixture,” Waddle explained.

Georgia, who lives in Tribes Hill about a block from the site, said she purchased the property as an investment when it became available without any specific plans for it.

According to Georgia, the ongoing activities took place after he was approached by Montgomery County officials looking for a general fill material disposal site for ongoing projects. County officials could not be immediately reached for confirmation.

Georgia said the site attracted illegal landfills, which it attributed to the presence of clippings of wood and grass. He has since installed cameras to monitor the site and has cordoned off the property to restrict access to anyone without permission.

Activity on the property halted for a few weeks following the August complaints before resuming on Wednesday when dirt and what appeared to be hot asphalt dumped around the corner.

Neighbors questioned the safety of the hot mixture and the possibility of heavy rain later in the day would cause the substance to run off. Waddle said the DEC regulations apparently do not distinguish between hot asphalt and hardened pavement.

Waddle, who works part-time, continued to monitor the site when he is in the area or receives complaints from residents and shares information with DEC.

However, neighbors say the limited monitoring of the site means the 5,000 cubic meters of general fill allowed could easily be exceeded and prohibited materials would be covered without anyone’s knowledge.

“I don’t know who’s measuring that, it’s not like they’re bringing people in and out of there,” Gene said.

Although the site can accept more than 1,000 cubic meters of additional fill, Georgia said it has no plans to do so at this time. He said only topsoil will be brought in to level the site before it is seeded with grass in the spring.

Georgia said infilling the site would help prevent erosion along the pavement and that her only future plans for the good are to maintain it.

“The only thing I will do is sow the grass seeds and mow them. It’s a lot nicer now than it was a year ago, ”said Georgia.

Beyond the neighborhood disruption caused by the landfill, Freya and Gene are concerned about whether the materials will impact a small stream running through the landfill area on their property or water supply.

“Our well is just below,” Freya said.

“Noise is one thing, but with a natural stream and people drinking water, there’s a bit more,” Gene said. “I don’t want to drink tar and oil.”

Waddle said he and the DEC inspector did not observe any bodies of water passing through the landfill site during their joint visit in August. However, when he returned to the site on his own this week, he saw the stream and captured a video of it which he will share with DEC.

The tributary of the Mohawk River is listed on the DEC environmental resource map as a Class C watercourse. A permit to disturb water through the DEC is generally required for most activities with an impact on these classified water bodies.

The Dacres plan to test their water to make sure it is safe next week due to their concerns.

Georgia expressed surprise when he learned of the concerns, saying none of his neighbors had raised it with him.

“I have never been contacted personally by neighbors, I would have liked them to call me,” he said.

Neighbors have said the same about the lack of notice they received prior to the start of activities on the property.

“Not even informing your neighbors that you are going to throw is not very thoughtful,” Sheehan said.

While the ongoing spill is currently cleared, neighboring landowners said the city should put regulations in place to prevent similar situations from happening without local permits and oversight.

More from The Daily Gazette: